The Peregrine Falcons of Llandaff Cathedral

Dr Rob Thomas, Senior Lecturer in the Cardiff University School of Biosciences, has been studying the peregrine falcons making their home at Llandaff Cathedral:

Sometimes, we live primarily in a world of people, but just sometimes wild birds bless us with their presence -and when they do we can glimpse, through them, something of the grandeur, wonder and mystery of the Creation. Here at Llandaff, we have been blessed over the last 12 months or so with the presence of a pair of Peregrine Falcons -Falco peregrinus; the fastest bird in the world, hebog tramor -the wanderer, iconic emblem of the wild, now returned in glory and a blur of feathers to south Wales, after a century of persecution and attrition of population.

My feet are locked upon the rough bark.
It took the whole of Creation
To produce my foot, my each feather:
Now I hold Creation in my foot

From Hawk roosting -by Ted Hughes

The Peregrine Falcon is one of Wales’ “apex predators”, along with a small menagerie of long-lost beasts that includes the Wolf, Bear, Lynx, Wildcat, the Golden Eagle and the Sea-Eagle. Nothing eats an apex predator; they sit at the top of the food chain and feed off the trophic levels below. Peregrine Falcons are specialist predators of other birds, but generalist predators in that the range of bird species that they eat is exceedingly broad; if it flies a Peregrine Falcon is likely to eat it. We never really lost Peregrines from Wales, but they retreated -westwards and uphill, to refuges in the hills and along the frayed Atlantic edge, where guns, poisons and the depredations of egg collectors did not ever quite extinguish their population. 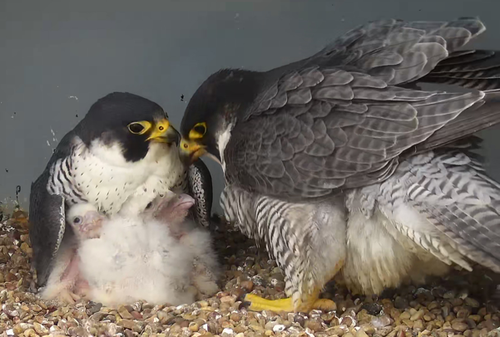 After reaching crisis point in the post-war years, when pesticide poisoning almost drove them to extinction in Wales, Peregrines have staged a come-back, and are now spilling over from their traditional rural breeding sites, and increasingly appearing in our towns and cities. Peregrines nest on inaccessible ledges on near-vertical cliffs, and our modern cityscapes provide them with an abundance of nest sites on buildings that replicate their vertical stone-built natural breeding habitats. The city landscape also offers ample feeding opportunities, which is reflected in the diet of urban Peregrines -familiar city birds such as Feral Pigeons, Jackdaws, Starlings and Sparrows figure large in their diet.­­

Here at Llandaff Cathedral, a male and a female Peregrine Falcon have been present intermittently since spring 2020. They are not always present and you need a tiny bit of luck to find them, but they are most often present on the eastern face of the Pritchard Tower, perched on the pinnacles and gables at the base of the main spire. From the path along the memorial garden on the southern side of the Cathedral, look up at the spire, and if you are lucky you will see a Peregrine Falcon staring back at you. Birds of prey have greater visual resolution than humans, so the Falcon is seeing you in far greater detail than you are seeing it. A pair of binoculars will help if you have them, but are not essential for seeing the Falcons.

We are hoping that the Peregrines will start to breed this spring, and a suitable nesting site has been provided for them on one of the alcoves of the Pritchard Tower, which has already been investigated by the birds. If all goes well, eggs will be laid later in the spring and chicks reared over the summer. If this happens, we have a web-cam setup ready to go, which will transmit video of the nest site to a TV screen in the Cathedral shop, at the west end of the nave, and this video will be available as a live-stream on Youtube. Nothing is guaranteed with wild birds though; they listen to other voices -of season, climate and environment- that we are only dimly aware of, and we may well need to wait for another year or two before the birds decide to breed, or maybe they will move on elsewhere.

Meanwhile, the Peregrine Falcons of Llandaff Cathedral are part of a study of the diet and foraging behaviour of urban-living Peregrine Falcons across the UK, coordinated by Ed Drewitt of Bristol University who has been studying the diet of Peregrines for the past 20 years. In association with staff and students at Cardiff University, we are collecting prey remains (feathers and bones) from the grounds of the Cathedral twice a week throughout the year. This is a slightly gruesome task, as we never know what gory remains or body parts we might find!

Prey eaten by the Cathedral Peregrines over the last year include many Feral Pigeons and Jackdaws, songbirds such as House Sparrows, Blackbirds, Goldfinch, Greenfinch and Chaffinch, as well as less expected species such as Meadow Pipit, Redwing, Grey Wagtail, Great Spotted Woodpecker, and even a Noctule Bat! These results are contributed to Ed’s national project on Peregrine Falcon diet, charting variation in Peregrine Falcon prey across the British Isles, across the seasons, and across the years. Hopefully the Llandaff Peregrines will stay and breed, and keep contributing data to this project for years to come.

If you see me wandering around the Cathedral grounds, picking up feathers, do stop and say hello. If the Peregrines are around I will be very happy to point them out, and if you’ve seen the Peregrines yourself I will be delighted to hear about your sightings.

Llandaff Cathedral has recently gained a bronze award from the Eco-Churches scheme coordinated by A Rocha -a Christian environmental organisation - that I have been associated with for many years.